Stories of Jesus: How to understand parables

Some of the best-known stories of Jesus are the ones he tells himself – the stories or parables.

Some of the best-known stories of Jesus are the ones he tells himself – the stories or parables. They stick in our minds, as good stories do. Words and phrases are part of everyday life; someone who helps out is a ‘Good Samaritan’, while a modest person might ‘hide his light under a bushel’, even for someone – most of us, probably – who isn’t sure what a bushel is.

But parables are odd things. They aren’t always like modern sermon illustrations, which are designed to make things clear (though sometimes they do). Sometimes Jesus spoke in parables to hide his meaning rather than clarify it (Luke 8.9–10). And sometimes, what we think we know about a parable turns out not to be quite true – perhaps because we’ve missed a clue that first-century readers might have grasped.

One book that guides us helpfully through the stories Jesus told is by theologian and biblical scholar Paula Gooder. In The Parables she says that while in some ways we ‘struggle to enter the world Jesus depicts in his stories because it is so alien to us’ and need it explained, in other ways we’re over-familiar with them and they don’t strike us with the same force as they did his first listeners. So, she says, ‘we need to “re-strange” the parables so they can surprise us again’.

She divides the parables into four parts: the land and all that lives on it (like the wheat and the weeds and the lost sheep; houses and their occupants (like the lost coin and the two builders); money (bigger barns, camels and eyes of needles) and ‘odds and ends’ which don’t fit anywhere else, like the Pharisee and the tax collector. As well as sections on the historical and cultural background of each parable there are ‘Things to think about’ and longer ‘Reflections’ that bring the story into our own experience today.

There are some fascinating insights. For instance, there’s the parable of the mustard seed in Mark 4.30–32 (it’s also in Matthew and Luke): it’s a tiny seed but grows into a tree, like the Kingdom of Heaven. But what kind of mustard is it? It might be the brassica nigra, which does grow quite tall; or it might be the salvadora persica. If it’s that one, it runs wild; the Roman writer Pliny says that ‘once it has been sown it is scarcely possible to get the place free of it’. So, says Paula Gooder, ‘On this interpretation the kingdom becomes an unsettling, disruptive force in the world that can never be eradicated no matter how hard you try.’

Or what about Jesus’ saying, ‘You are the salt of the earth’? That too is in Matthew, Mark and Luke, and we have all heard sermons about how salt was used as a preservative that stopped food going off. But there are all sorts of problems with this parable, not least that salt can’t become ‘un-salty’ (Mark 9.50). She concludes it’s ‘almost impossible to work out what Jesus meant, how it was originally heard, or even how we are to understand it today … Any attempts to make sense of this parable involve ignoring the cautions issue by one scholar or another.’ It can still speak to us – but handle with care!

Another well-loved parable is the story of the lost son (Luke 15.11–32). Again, we all know it – the son who leaves home is a picture of those who wander from God, and the loving father is a symbol of God himself who welcomes them home. Not so fast, says Paula Gooder – the father has behaved very foolishly to his younger son and very unfairly to the older one. He isn’t actually any kind of role model at all. But the parable still works: ‘If this flawed, unwise father, who nevertheless loves his son immensely, behaved like this, how much more would God react with love to those of us who are lost and then return home again?’

This is a book that’s full of insights, both scholarly and spiritual – and it’s very honest, too. Wrestling with the parable of the shrewd manager (Luke 16.1–12), she says it’s ‘difficult and bemusing’ and concludes, ‘this is where I throw up my hands in defeat and frustration, and leave you to reflect on it further’.

Jesus’ parables are wonderful windows offering different ways of looking at our world. Windows need a good clean from time to time, to rub away the grime. A book like this can make them sparkle again, and help us see their meanings clearly.

The Parables by Paula Gooder is published by Canterbury Press.

This is the first in a three-part series of stories on difficulties facing the Church in China during 2020, the year of the pandemic. 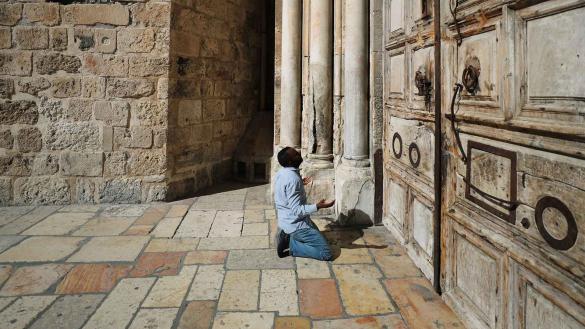 Lament in lockdown: a message from the Arab Israeli Bible Society

We are in an era that's seen many societies affected by Covid-19. This virus has disturbed our health systems, financial outcomes, social interactions, and spiritual growth.

Story of the Bible, Act 11: Body of Christ

Out of all the billions of people in the world, no two people have the same fingerprints. Each one of us is unique, and that uniqueness is far more than skin deep.