The King James Version (KJV) or King James Bible (KJB), is also known as the Authorised or Authorized Version (AV). It is a classic translation which has left a lasting impression on the English language and its literature. About 300 words and phrases found in the KJV are now part of the English language. The KJV was first published in England in 1611. It was commissioned by King James I of Great Britain, and the translation committee included traditional and puritan Anglicans, who defered to the previous work by William Tyndale. It was ‘appointed to be read in Churches' as the official or authorised version for the Church of England.

It is used widely today in the USA (where it is the most owned version) and in African countries such as Nigeria, largely because it is perceived as a reliable and noble version of the Bible. The King James Version was based on the Greek Textus Receptus used by many Reformation translations. It uses traditional dignified language in a majestic style, that has stood the test of time, and is suitable for ceremonial occassions. Prince William chose this translation to be used at his weddding in 2011.

The version of the King James Version printed today is the 1769 Oxford revision, which corrected and tidied up spellings and punctuation. In 2011 the 400th anniversary of the KJV was celebrated internationally by all Christian denominations. The Bible Society produced a special 400th anniversary edition of the KJV and the useful "Famous Phrases" booklet about the KJV's impact on the language.

But whoso hath this world's good, and seeth his brother have need, and shutteth up his bowels of compassion from him, how dwelleth the love of God in him? (1 John 3.17) 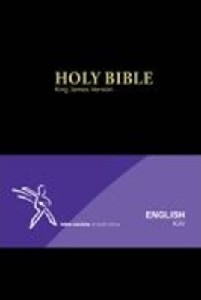 The Bible in the beloved and traditional King James Version, with a black hardback cover. 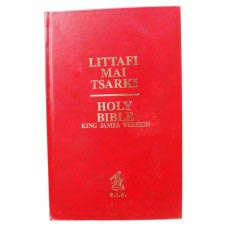 King James Version (KJV)/Hausa diglot with topical headings. Texts side by side.