Responding to the refugee crisis

This appeal is fully funded, please consider giving to these appeals:

Will you Open the Book for the next generation? 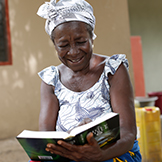 Bibles for Alpha in Ghana

In recent months, requests for Bibles from refugees have increased five-fold. Our local director Jutta Henner and the Bible Society team in Austria are working flat-out to meet the demand.

Jutta said, ‘The Bible reminds refugees that, as Christians, we are a family; we have a Father in heaven and a brother in Jesus Christ. We have a home; there’s a table laid out for us by God himself. In Scripture, refugees find reassurance that God knows their needs and fears, and they are not alone.’

At this crucial time, will you give a Bible to a refugee who has fled their home?

‘I knew I had to find a way to leave Syria when my five-year-old son saw an IS fighter kill a man in the street,’ said Yusef, 46.

Yusef ran a printing business in Aleppo, Syria before the war. When fighting came to Aleppo, their home was on the frontline. Bombs fell every day, food was scarce – his children ate mouldy bread they found in the street.

When there was a pause in the fighting, Yusef rushed his family into the car, grabbed their documents and fled.

They are now in Austria where we’re working with church partners to support them and others who need refuge. Your help today will enable us to continue this ministry.

Hundreds of thousands of people are fleeing their homes. They are seeking refuge somewhere safe – another city, a neighbouring country or across Europe.

Bible Society is working with refugees arriving in Europe - in Hungary, Austria and Calais – as well as those in Turkey, Lebanon, Jordan, Syria and Iraq. We’re providing Bibles and Scripture Portions in native languages such as Amharic, Tigrinya, and Arabic.

But we’re running out, especially in Austria where we’ve given out our stock for the year in just two months. We never want to say no to someone who asks for a Bible. But given the current demand, we urgently need some help.

Will you support refugees in Europe, the Middle East and those displaced in their home countries?

We believe the Bible can be a catalyst for change across the Middle East. Our dedicated staff are stepping up efforts to share the Bible and demonstrate God's love.

In Calais, Austria, Hungary, Jordan, Syria and Iraq we provide Bibles and Scripture Material to people who have been forced to leave their homes. The Bible is full of stories of migrants, persecuted communities, and people crossing borders.  It provides reassurance and hope.

Challenging fear and misunderstanding between people of different religions is essential if we want to see stability in the Middle East. In Lebanon, we plan to host interfaith debates between Christians and Muslims. In Turkey, we're working with students at Islamic theological faculties to challenge perceptions about Christianity and the Bible.  These are just two examples of our work to build bridges.

We have nine people, including volunteers, working in Syria right now to meet the huge demand for Scripture. Similar numbers are delivering Bibles around Iraq. It's vital that we provide the best possible support to these people working in exceedingly difficult circumstances in conflict-ridden countries.

Children across the Middle East have witnessed unimaginable horror and there's a vital need to address their wounds. We are training leaders in Bible-based trauma healing which will launch in Jordan, where almost a million Syrian refugees are living in camps.

In Turkey and Jordan we aim to run major public campaigns to promote the Bible as an alternative to the ideology of extremism. We'll host public debates, run social media campaigns and distribute thousands of Bible booklets.

Thank you for standing with us as we look to bring the Bible to life for those who need it most.

N.B. Names have been changed to protect identities

To view the map you must accept the following cookie categories: